After eating some of the leftovers with my lunch at work on two occasions, I still had some of the rice and sweet potato in my fridge.

Then it dawned on me: make rice pudding. That’s what my dad would do.

My dad isn’t much of a cook, and never has been. He has gotten by the past 30 years, showering my mom with praises for her cooking, and cleaning up after meals. When my mom was was taking night seminary classes for a few years during my childhood, we mainly ate fast food.

But my dad has a sweet tooth to challenge the best of ’em.  This sweet tooth has been a motivating factor for him to dabble in the area of baking.  I remember him baking rice pudding quite regularly.  I think he secretly added extra rice to the pot during dinner prep so there would be enough left over! Because rice pudding can take a long time to bake, sometimes it would be still be baking well into my bedtime, intoxicating the house with its delicious scent.  Those were the nights my dad and I brushed our teeth twice.

My rice was made with a chicken broth substitute, so that savory aspect had to be dealt with. I hadn’t added too much salt and pepper to the dish as a whole, so that allowed for flexibility. I incorporated some other leftovers I had lying around — some of my raisins and cinnamon came from leftover rugelach filling (there always seems to be leftover filling, no matter what you’re making). I researched a few online versions of the recipe (like Paula Dean’s) and decided to follow one that involved some precooking of the custard on the stovetop, which meant that the pudding baked for around 30 minutes instead of an hour and a half.

2 Cups milk (I used a combination of 1/2 Cup half and half and 1.5 Cups skim milk)
1 cup leftover pre-cooked rice (even one that had been cooked in broth with sweet potatoes a little salt added worked OK!)
2 eggs
1/4 cup+ granulated sugar
1/2 tsp vanilla extract
1/2 tsp cinnamon, divided
1/3 cup raisins
dash of nutmeg 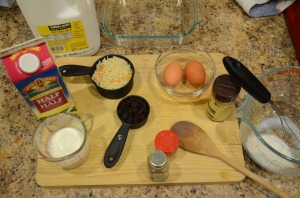 In a medium saucepan, heat the milk and rice, stirring frequently so the milk doesn’t burn. Bring to a slow simmer. This takes at least 5 minutes. 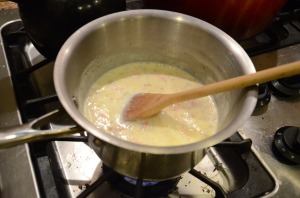 In a separate large bowl, combine the eggs, sugar, vanilla, raisins, and 1/4 tsp of cinnamon. 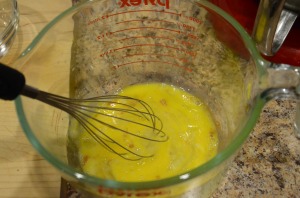 Add egg mixture to the milk and rice and allow to cook for just a few minutes, stirring occasionally.

Pour into casserole or baking dish. Sprinkle remaining 1/4 tsp of cinnamon and dash of nutmeg on top of the custard. 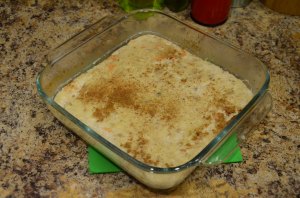 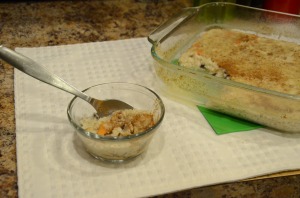 Not too fancy, but comforting. Can be served hot or cold. But in case you’re wondering, my dad always eats it hot.

2 thoughts on “A taste of childhood”