It’s been awhile since I mentioned a pizza recipe. I don’t want you to think I have a one-track pizza mind. The truth is, among all the random recipes I try, pizza is on the menu almost every week. Yes, part of the reason is that, as previously mentioned, my husband often does half the work for me by pre- making dough. Then topping the pizza is so darn easy and good! Like soup, it is a wonderful vehicle for using up what is in the fridge.

This recipe is unusual for its unusual toppings: earthy greens, raisins, and anchovy fillets. It’s not the gooey tomato-saucy crunchy Neapolitan pizza you (or I) fantasize about. Don’t turn up your nose, though, because it provides a rather healthy concentration of vitamins and nutrients in one tasty package!

I had anchovies on hand because I have I have a giant parsley plant out front, and my related recipe searches keep leading me to pasta Puttanesca. I have yet to make said pasta, but the rest of the can of anchovies awaits! 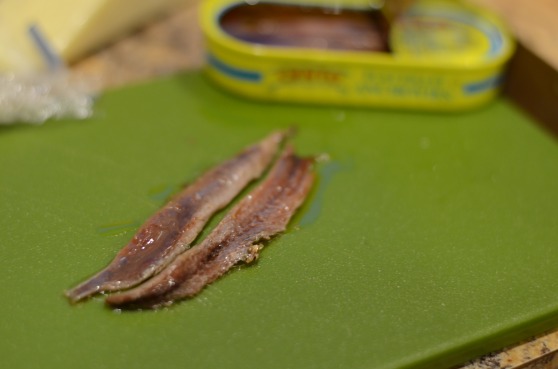 For my greens, I used mostly the CSA swiss chard and a combination of spinach and arugula. 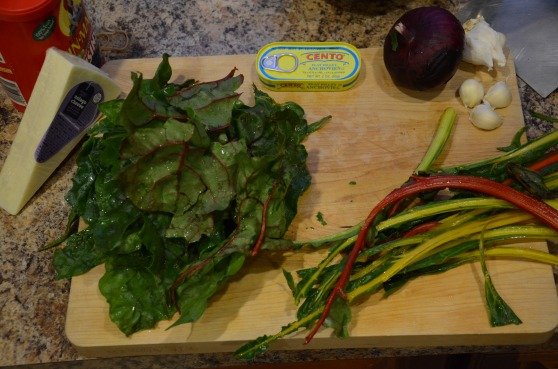 Preheat oven to 400°. This was when I was still oven-less (it’s fixed now, hooray! What a new motherboard can do…). I heated up the grill instead.

Heat a large nonstick skillet over medium heat. Coat pan with cooking spray. Add red onion, and cook for 10 minutes or until tender, stirring occasionally. Add 3 tablespoons raisins, garlic, and anchovies; cook for 2 minutes, stirring frequently, as the anchovy melts into the mixture. 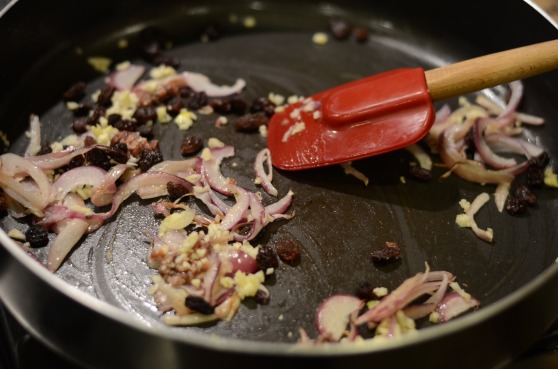 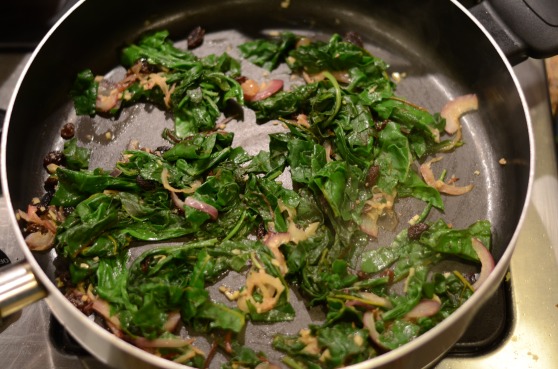 Gotta love it when it calls for cheese under toppings under cheese!

Bake at 400° for 12-15 minutes or until cheese melts and begins to brown. Cut pizza into wedges and serve.