Where has the time gone? 2015 is well under way. I know my blog has been quiet the past few months. I can explain away the last month, at least, by pointing to all the holiday planning and gatherings and dining out. Before that, of course, there was the slam of my new job, commute, class work…and the end of the CSA. I no longer have cooking inspiration built into my life!

The quiet end-of-December period did give me the chance to devote at least a couple of stretches of time to cooking projects. As I saw a major calendar flip approaching, it seemed imperative that I give attention to some of the (previously prepared or semi-prepared) items in my freezer that were dated from 2014…some with months lower numbered than I care to admit.

One such item was a cupful of sofrito I had made to use up some herbs along with the in- season tomatoes and peppers. I’m still not sure why I didn’t make a dish with it right away, since this recipe (which I think I followed for the sofrito) is quite easy.

This sofrito discovery coincided with a rare craving for roasted poultry. You see, like many people, Christmas dinner in my family features a non-turkey entrée such as ham, pork, or lasagna. It’s all delicious. I just thought it was time to have a little chicken in my life.

I found my inspiration in a version of chicken & rice from Food & Wine and headed to the store. Little did I know, I would be presented with another opportunity to demonstrate my make haste not waste philosophy! While I was having trouble finding chicken legs, I came across a whole cut up chicken at a greatly reduced “manager’s special” price, because it was being sold the day it was dated “sell by.” Perfect! Some grocery stores won’t even offer shelf space for these perfectly good items. What a shame! You need to be careful with meat and dairy dates, unlike many other products, but fortunately I planned to cook the chicken right away. (And the extra pieces I added to other chicken carcasses in the freezer to finally make some chicken stock a few days later.)

Roasted Chicken Sofrito with Rice
From Food and Wine

Season the chicken with salt and pepper and dust lightly with chili powder.

In a Dutch oven or other large ovenproof skillet, heat the vegetable oil over medium-high heat. Add the chicken to the skillet and cook over moderate heat until well browned, about 4 minutes per side. 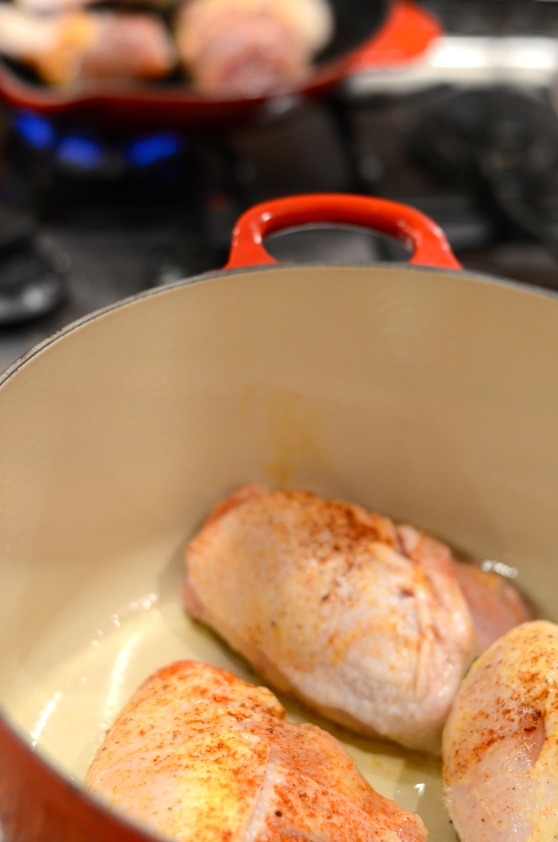 If you’re impatient like me, you could use an extra skillet for the extra chicken.

Transfer to a plate. 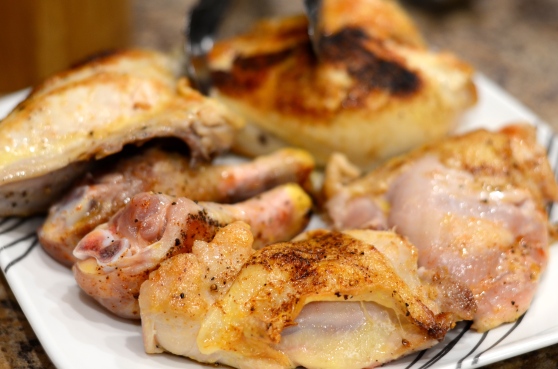 Add the sofrito, thyme sprigs, and onion to the skillet and cook over medium-low heat, stirring occasionally. 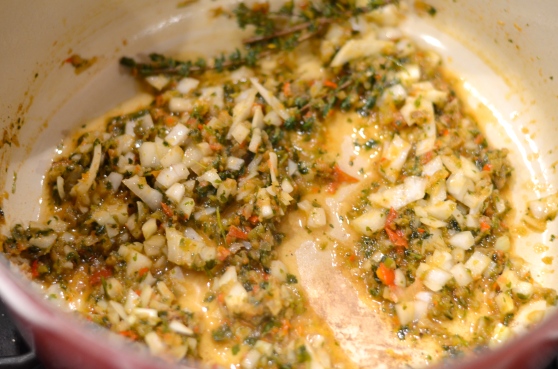 I didn’t decide it needed the onion until after first starting to warm the sofrito.

Once the onion is beginning soften, add the diced tomatoes. Bring the mixture up to a bubble, then add the chicken stock. Bring to a boil.

Stir in the rice and 1/2 teaspoon of salt. Bring to a simmer. Place the chicken pieces on top of the rice, with the skin side up.

Place the pot, uncovered, in the upper third of the oven and bake for 20 minutes.

Check to see if the chicken is cooked through (some cuts may finish before others) and the rice has absorbed the stock. It took nearly 30 minutes for the fat chicken breasts from my chicken to come up to 165. 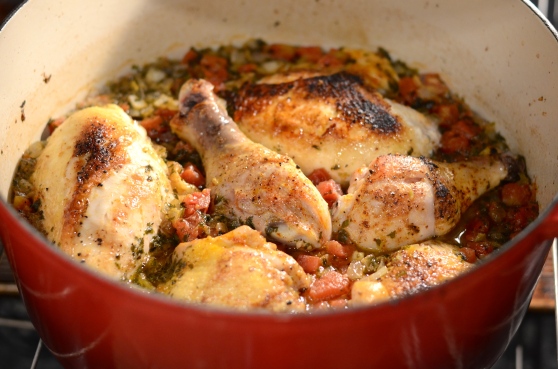 Turn on the broiler and try to get the pot within 6 inches of the heat to crisp the chicken skin, if possible.

Remove the chicken to a separate plate. Remove and discard the thyme sprigs.

Add in the lemon juice. 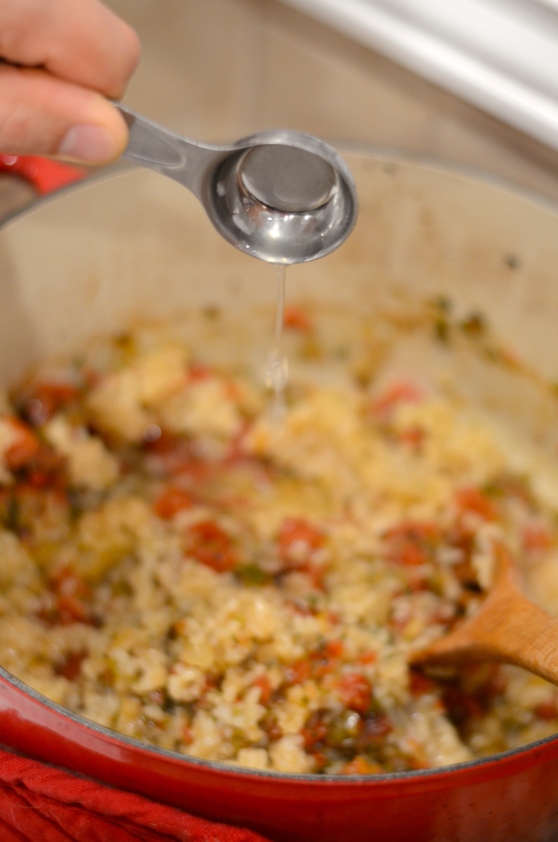 Spoon rice onto the place and scatter with some almonds. Add the chicken and serve. 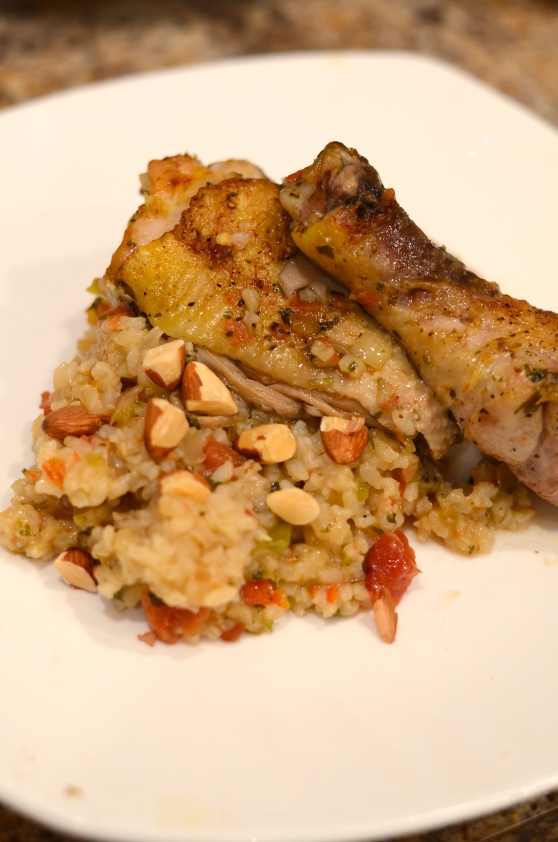 How was it? Man it was delicious. Yes, it satisfied my desire for chicken. Of course my favorite part was the rice. It had an unbelievable texture, almost like risotto. The flavors of green chiles and acidic tomatoes and lemon juice combined with the rich chicken juices plus a satisfying crunch from almonds–talk about truly crave-able.

Here’s to a filling and fulfilling 2015!