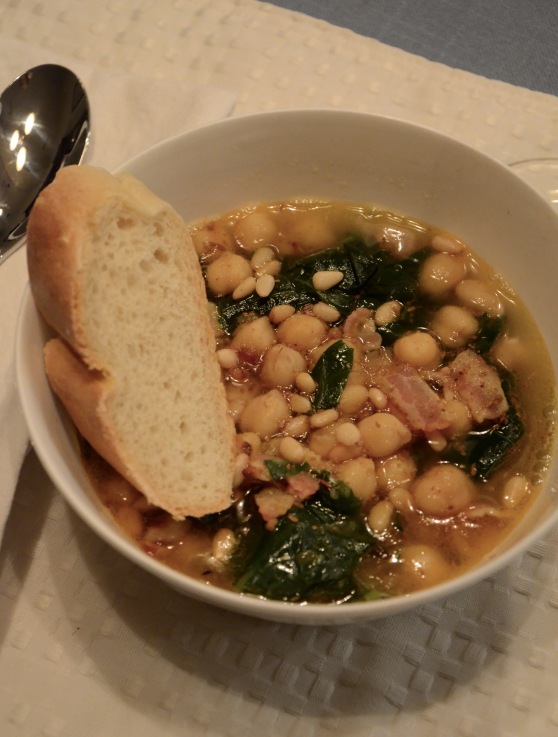 I told you I was going to feature the pressure cooker again soon, didn’t I? The first time cooking dried chickpeas in the pressure cooker was such a success: 8-hours of soaking, about 10 minutes for the pressure cooker to warm up, and 6-7 minutes of steady cooking resulted in perfect beans, whereas regular stovetop simmering would have added more than an hour. Last time, I started with a little more than half bag of dried chickpeas and ended up with cooked beans that were delicious on their own, then added to a salad, and then transformed into hummus. For the rest of the bag, I wanted the chickpeas to be used in a recipe that used some of the broth and incorporated other ingredients I had on hand. It would also be useful if the leftovers of the dish could be easily reheated for lunch, as I hustled around the house while the wee one napped.

A search on The New York Times Cooking website brought up a “Garbanzos and Greens with Chorizo” recipe. I didn’t have chorizo, but I did have an open package of bacon. I didn’t have kale or chard, but in the freezer, I had a bag of collard greens that I had blanched and frozen weeks before (collards are sold in such HUGE bunches, aren’t they?). Since collards and bacon often go together anyway, it was meant to be!

Note: you could omit the bacon to make this vegetarian. Just amp up the smoked paprika (one of my favorite pantry spices).

Soak the chickpeas overnight or all day (I soaked mine about 6 hours.) Drain and put in the pressure cooker. Add the onion half and clove, chopped carrot, bay leaf, and vegetable oil and cover with 6 Cups of water. Reference the directions that come with the pressure cooker to make sure you are using it correctly and safely. I put mine over a high flame until the lid sealed and the pressure regulator began to rock. I them set the timer (for 7 minutes) and lowered the heat so the regulator was rocking steadily but not excessively throughout the cooking time.

In the meantime, chop your other ingredients, and toast and grind your cumin seeds. 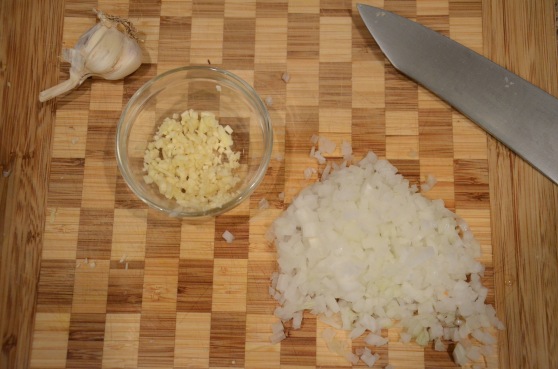 When the chickpeas are done (and the pressure has lowered and the lid can be opened), season generously (and I mean generously) with salt.

In a wide, high-sided skillet, heat olive olive oil over medium-high. Add the onion and salt and pepper and cook until softened and turning slightly brown. Add the bacon and cook until browned.

When the chickpeas were done, I removed the onion, carrot and bay leaf from the pot and then strained the mixture, saving the broth and separating the chickpeas.

Into the bacon-onion mixture, stir the garlic, smoked paprika, and 1/2 teaspoon of the cumin. Then add the chickpeas and about 1/2 Cup of the chickpea cooking broth.

Turn the heat up until the liquid is at a simmer; add the greens and salt and pepper. If using fresh greens, stir until they wilt. Otherwise, put the lid on the pan and allow to cook for a few minutes. 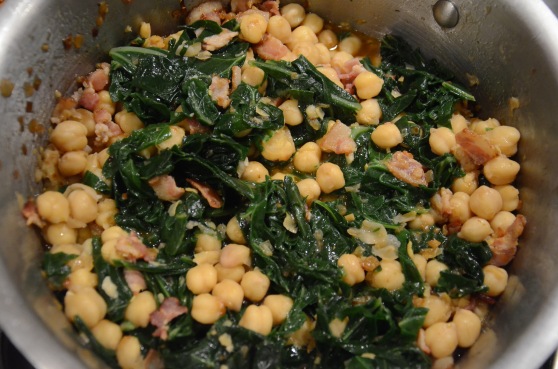 Taste and add salt and pepper as needed. Then transfer a portion into each individual soup bowl for serving. 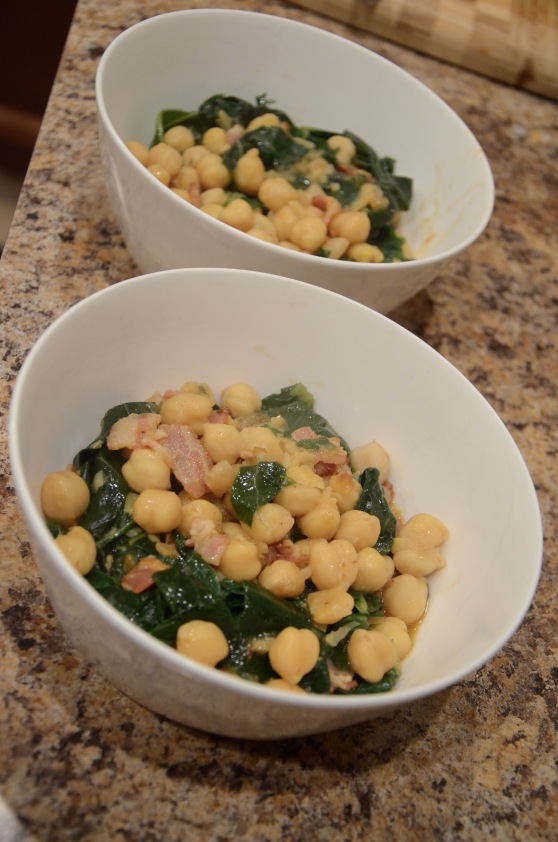 Ladle 1 Cup of broth into each bowl. Sprinkle with remaining cumin and pine nuts.

Serve with a toasted baguette slice or two to soak up the broth. Enjoy with a celebratory glass of sparkling wine!

As you can imagine, sometimes my quest for using up food makes for an unusual diet.

For example, I started last Sunday’s dinner with a kale and fruit smoothie, followed by grilled steak with chimichurri sauce, and topped off with bacon peanut butter cookies for dessert. Yep, you read that correctly.

Of course, I can explain:  Awhile back I had preserved leftover kale by freezing it in an ice cube tray, and I still hadn’t used it up. I added frozen berries, banana, nonfat greek yogurt, and honey for my appetizer drink. I made chimichurri again because I had made cubes of leftover parsley and cilantro leaves in olive oil also saved in the freezer.
As for the cookies….well, somehow my package of bacon wasn’t being used enough. And I had come across the recipe again from Joy the Baker. I was curious. How were they? All I can say is WOW.

Let’s talk about something that makes sense together: eggs and greens. 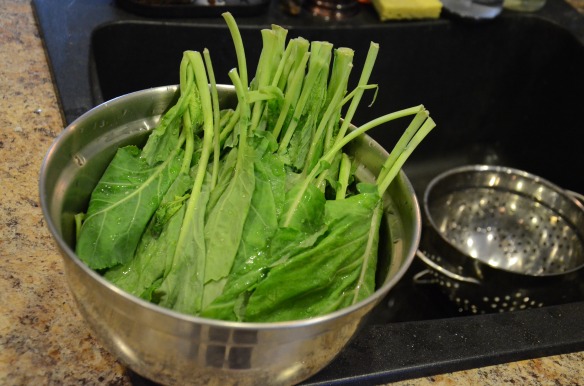 I’ll be experiencing an influx of greens in the coming weeks, so I’ll be sneaking them in wherever I can. This is a good thing, because it adds nutrition that I have probably been lacking lately.  Can we agree for a minute that bacon, in moderation, fits into a healthy lifestyle too? This is another easy and adaptable recipe. 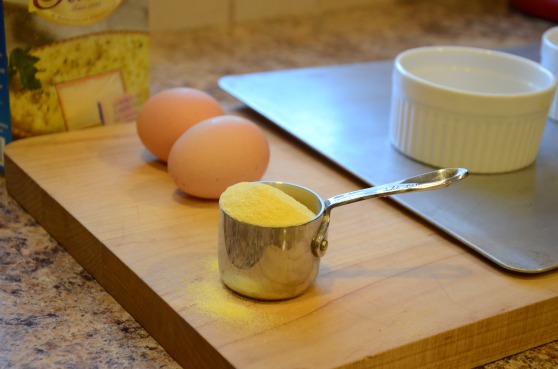 Stemming the greens is probably the most tedious part of this process. Here’s a quick hint to save time: fold the leaf in half over the stem so you only need to make one slice to remove it! 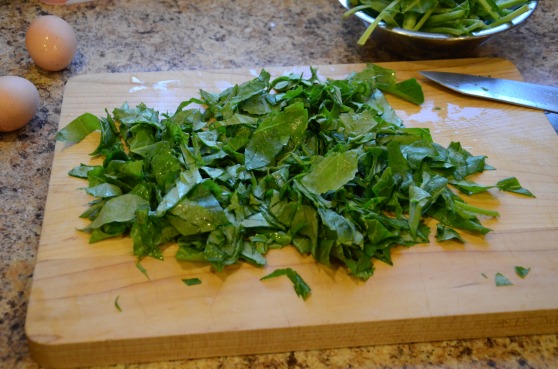 Preheat oven to 400°F. Arrange 2 large ramekins (at least 5 ounces) on a baking sheet, grease, and set aside.

I used the remains of a package of instant polenta, which requires only five minutes of stirring. If using packaged polenta, follow the package directions. All methods start with boiling the water and salt, whisking in the grains, and reducing the heat to low. If using cornmeal or grits, you’ll be stirring often for 10-15 minutes until thick and creamy.

Remove pan from stovetop. Stir in butter and season with salt and pepper. This is the step where I could definitely see something like shredded cheddar cheese added, if you’re into that sort of thing 🙂 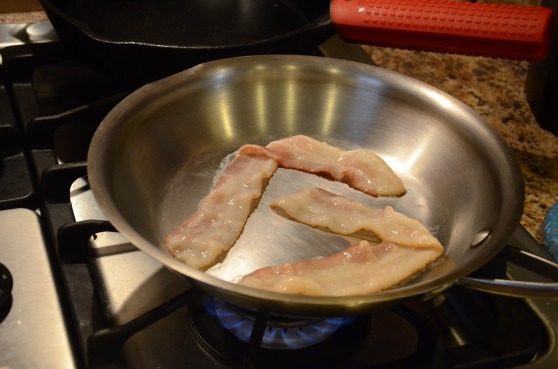 Cook bacon in a large skillet over medium heat, turning occasionally, until just crisp, 6 to 8 minutes. Transfer to a paper towel-lined plate to drain and cool. Roughly chop.

Pour most of the bacon grease out of the pan, leaving about 1 tablespoon. Add greens to skillet and cook, tossing often, until wilted and just tender, about 5 minutes. Stir in bacon and season with salt and pepper. Arrange greens on top of grits in ramekins.

Crack an egg into the center of each ramekin and bake until whites are almost set, 15-20 minutes. Keep an eye on them or you’ll be sad like me and miss out on a runny yolk! Set aside to let cool briefly then serve. 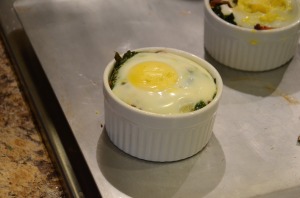 Not quite how it was supposed to turn out, with a set egg. That is what happens when you run upstairs to change your clothes toward the end of the cook time!